What could be so important? 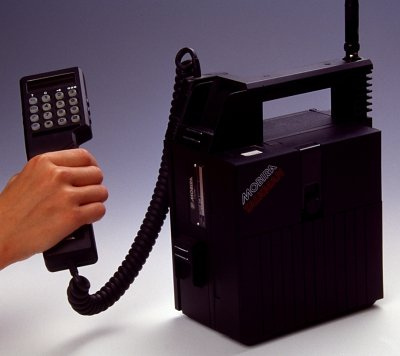 It was the late 1980s, in a parking lot of Pizza Hutt in Auckland, New Zealand and my uncle was proudly showing off his new (massive) car phone that he had in his (massive) silver Mercedes. It was probably a family dinner for someone’s birthday, but I can’t really remember. What is clear in my memory though is my uncle’s pride and our family sniggering as we drove home later that evening. What could be so important that you would have to take a call while DRIVING?! It just seemed so utterly ridiculous! Oh, how little did we know!

So last Thursday as I was walking around London City at lunchtime I had to smile as I saw people with their phones stuck to their ear as they rushed from place to place, or with a phone in their hand, fingers swiping and tapping away as they looked up every few steps. The EXACT SAME thought came to me – What could be so important that you need to talk or connect while rushing around on your lunch break?

Now, I’m not some ludite who doesn’t use a phone while out in public. There have been many, many times I have been rushing along the street, hurriedly texting someone that I am running late or asking my partner what I should pick up from the supermarket as I walk home from the tube. (Although to be honest my phone is most often on vibrate and stuffed somewhere in my overflowing handbag that I don’t feel it vibrate, which many exasperated friends and family know by the number of answer phone messages they have to leave for me!!) Anyway,  there just seemed to be something so comical last Thursday lunchtime as I walked along the busy footpath.

The quickened steps and furrowed brows of those with phones pressed to their ears seemed to be almost laughable. So much so that I started to think, what would it be like to step out for lunch and actually ENGAGE with the world around us? What if we put away technology and felt the cool wind circulating? What if we were aware of the noise of the traffic and even the cry of the seagull above? Or perhaps (heaven forbid!) we might look at our fellow workers also on their lunch break in the eye and give them a rye smile.

Monday was World Peace Day and there was lots of discussion around compassion and connection. Perhaps we can start with that little sliver of our day when we leave the office to fuel our growling tummies. And perhaps we can ask ourselves:

What could be more important than being where I am right now?